Best Time of Year for Motorcycle Tour in Malaga

Malaga is blessed with the weather when it comes to motorcycling! It has a rideable weather throughout the year with some months being especially gorgeous. Due to its location on the coast it enjoys a milder, less extreme climate than the inland cities of Spain such as Granada, Cordoba or Seville. And while no one is guaranteed to have a completely rain-free holiday (that’s why we supply the rain gear with our bikes if you wish!), the chances are good that the weather is going to be excellent! 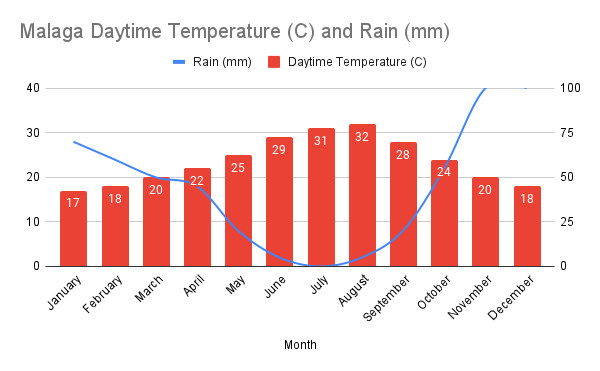 As we can see from the graph above, there is a distinct seasonality when it comes to weather in Malaga.

The winter months in Malaga still see very comfortable weather along the coast with highs just under 20 and lows around 10 degrees. With the amount of rain gradually decreasing while the temperature rises the riding becomes more comfortable. If you go on tour in January or February it’s better to stick to the coastal areas as the inland cities (especially those with a higher elevation like Granada) can be cold and might even see the snow. From March, one should be able to ride inland too with some warm layers. Starting from March there could also be occasional windy days which is something to bear in mind.

From the second half of April the temperatures rise into comfortable 20s while the amount of rain drops significantly. It’s an excellent time for exploring Southern Spain on a motorcycle while you can still see Sierra Nevada, the highest mountain range in the south, covered with snow. Apart from the Easter Weekend the areas along the coast aren’t busy yet which means less crowds, less traffic and lower prices. You can also comfortably explore inland towns too as the temperature rises. The sea might be a little too cold for swimming still as it cooled down over the winter months.

The height of the summer season. The temperatures rise in the high-20s and even 30s along the coast while the inland areas, with more extremes, can easily see temperatures well into 40s. The rain virtually disappears and the days are almost guaranteed to be sunny. It gets really warm so some mesh motorbike gear could be an option.
Unfortunately such excellent weather comes at a cost - literally. The coastal areas are flooded with tourists, the traffic is dense and the accommodation prices are at its highest. One would need to wander inland for some empty excellent roads to explore - of which there are plenty. It’s still a great time to enjoy a motorcycling holiday as long as you’re prepared to be in the high of the high season.

In our opinion, it is the best time to visit Southern Spain for a motorcycle holiday! The number of tourists (both Spanish and international) drops significantly while the weather is more mild without the scorching heat of the summer. One can again have a lot of space to themselves and it’s genuinely a nice time to travel around. The sea which warmed up in the summer is perfect for swimming (at around 22 degrees sea temperature) and the rain usually only starts to pick up towards the end of October. If it was up to us, the end of September or the beginning of October would be the time to go!

This is when the Andalusian version of the autumn and winter arrives. Temperature-wise it is still perfectly rideable with 18-20 degrees at daytime. While the amount of rain picks up and reaches 100mm in November and December, this needs to be taken into a context. One still has an average of 5.5 sunny hours per day and 6-7 rainy days per month (compared to 10 in Berlin and 11 in Paris). So it’s still a nice time to ride around as long as one prepares to tolerate a bit of rain once in a while. On a positive side, the tourists are gone and won’t come back until the Christmas holidays so you can have the whole of Andalucia to yourself! 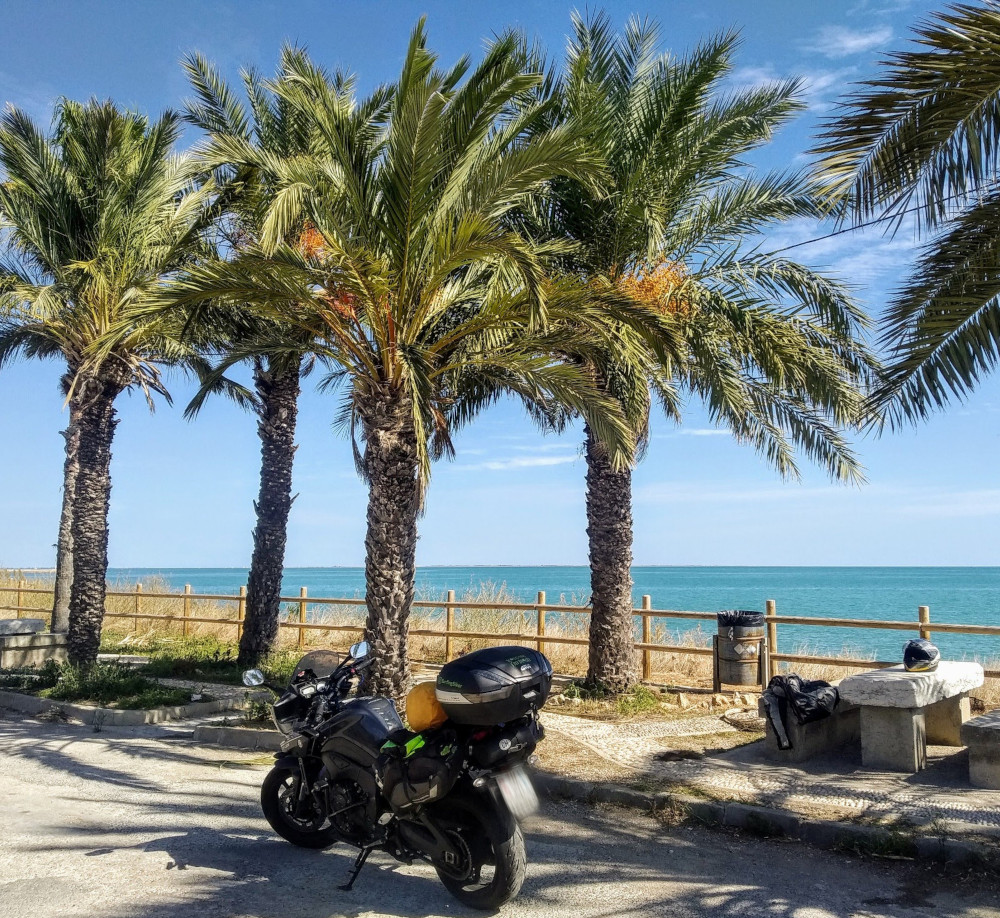 Overall, as one can see, there isn’t really a bad time to visit Malaga for motorcycling! There are good and excellent seasons and each of those have its own pros. If you have any questions or concerns about weather (or anything else really) at the specific time of year when you’re planning to visit, feel free to contact us here at Andalus Moto and we’d be glad to help!

Back to Travel Information 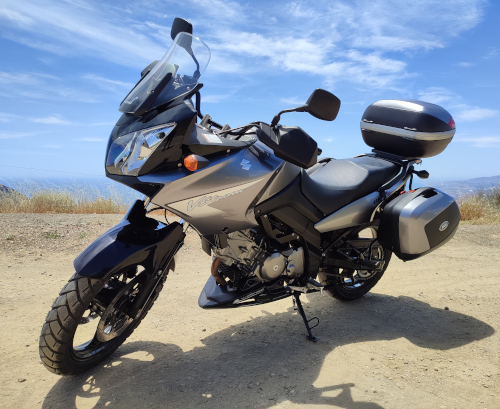 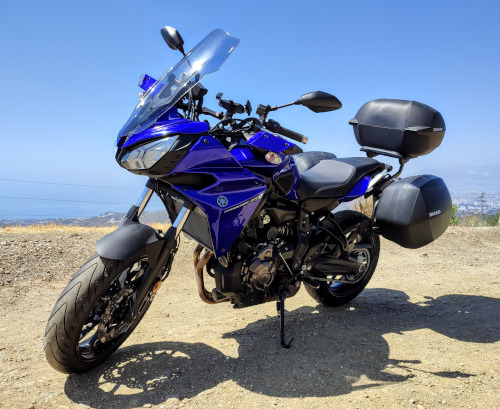 The Gems of Andalucia: 8 days itinerary 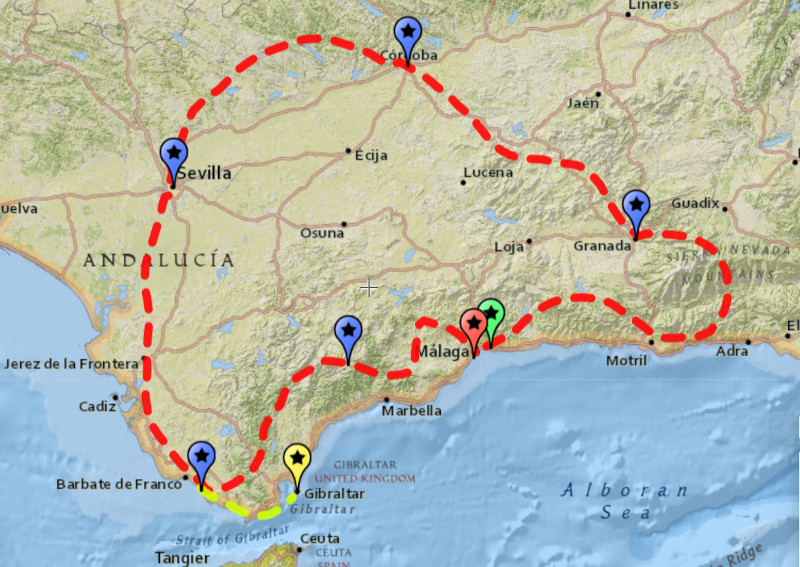 Difficulty: Easy to moderate. Twisty roads, but with mostly good road conditions. 99% on roads (can be occasional gravel stretches due to roadworks or access roads to accommodation). 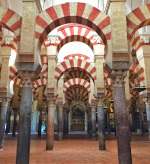 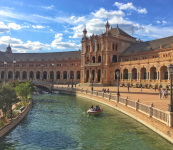 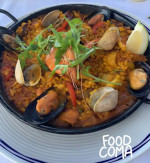 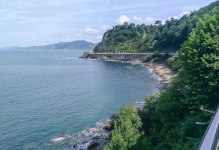 The Coast, The Desert and the Mountains: 7-9 days itinerary 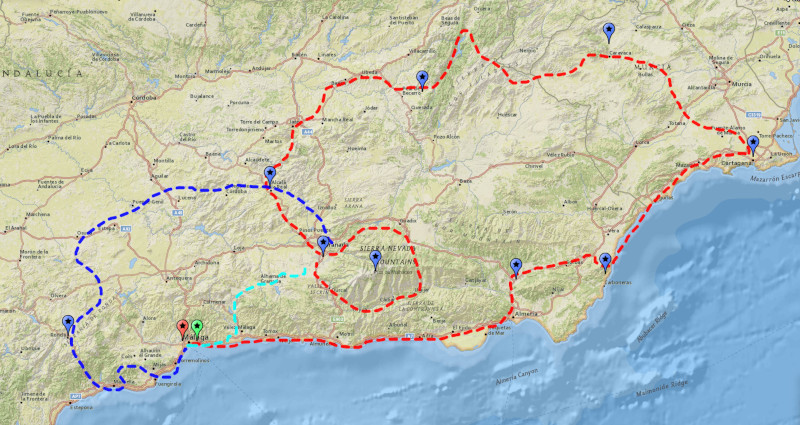 Duration: 7-9 days, depending on visits to Granada and Cartagena

Difficulty: Easy to moderate. Twisty roads, but with mostly good road conditions. 99% on roads (can be occasional gravel stretches due to roadworks). 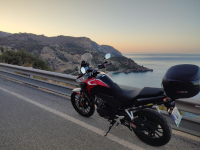 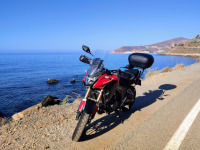 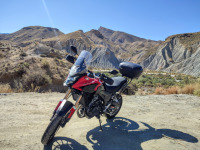 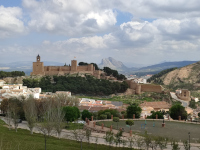 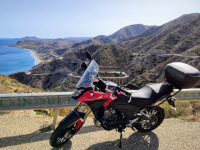 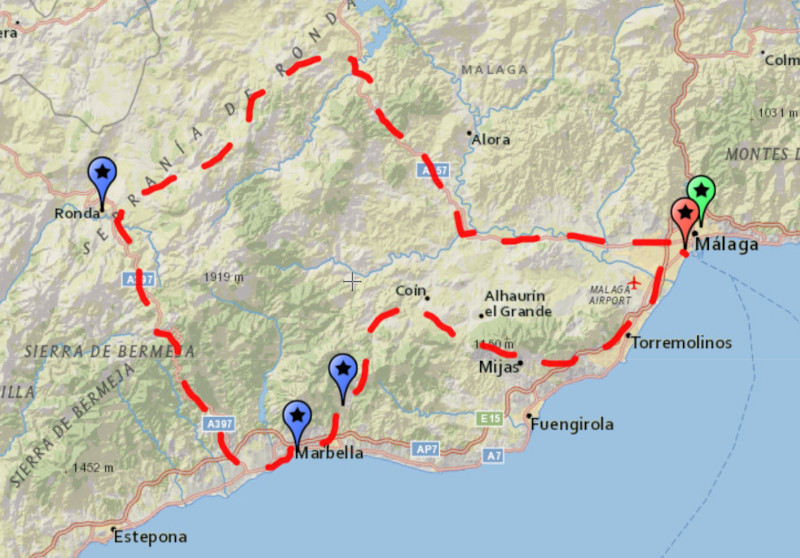 Difficulty: Easy to moderate. Twisty roads, but with mostly good road conditions. 99% on roads (can be occasional gravel stretches due to roadworks). 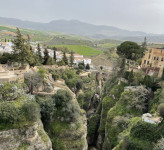 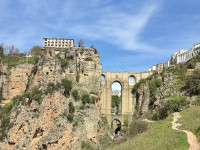 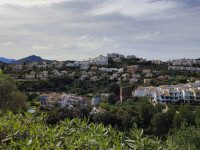 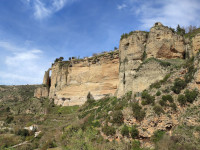 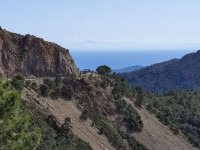 The information about Gibraltar trip is coming soon... Stay tuned!